43 years ago (1974) Donald Johanson and Tom Gray discovered Lucy. She was found near Hadar in Ethiopia at nearly 3.2 million years old. Lucy belonged to the extinct hominid species Austrolapithecus afarensis (Hadar being the site with the greatest number of remains) wide spread across Eastern Africa. Australopithecus afarensis (closest in evolutionary terms to the genus Homo) moved upright, on two legs as a bipedal, with a well-developed body but relatively small brain capacity (380-430m3). Research concludes that Lucy died at a young age although she had reached adulthood. Weighing in at 29 kilograms, at a height of 1.1 metres. Some studies discuss the possibility that Austrolapithecus afarensis was almost completely bipedal, whilst other studies claim that Austrolapithecus was still a tree-dweller.

Toward the end of the day of the discovery of Lucy’s skeleton the research team decided to celebrate with alcohol and the Beatles album Sgt. Pepper’s Lonely Hearts Club Band playing on the radio in the background.When the song Lucy in the Sky with Diamonds finally came up, someone suggested they name the skeleton Lucy. The name was unanimously accepted, the scientific name of the discovery being AL – 288 – 1.

Lucy’s famous skeleton is today hidden from the public eye and kept in a secure and specially constructed location in the National museum of Ethiopia in Addis Ababa, not far from here it was discovered. Nevertheless, the original finding was put on public display in the US from 2007 – 2013, despite the fear of potential damage. Today the public only has access to gypsum castreplicas of the famous skeleton. 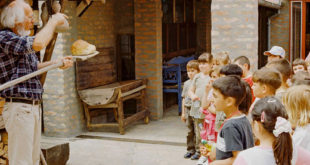 The European Museum of the Year Award 2017: Museums of Southeastern Europe