Every year the students of United World College Mostar instead of excursion like in our schools are organizing several projects in BiH and surrounding countries. This year incooperation with Archeological website arheon.net  we have organized an Archaeology Project Week.  It consisted out of few lectures, two fieldtrips and a workshop on Photogrammetry.

First of all, on Monday 12th of October Drago Mejdandžić, representative of arheon.net presented “Photogrammetry in Archeology” in Gallery Aluminij, Mostar. In the same venue professor Saša Šantić presented “Artistic treasure of Bosnia and Herzegovina”.

On Tuesday, the second day of our project we visited the capital city Sarajevo where we had the opportunity to see many of the attractions that the city has to offer, as well as to see interesting archaeological exhibits from the National Museum of Sarajevo. Firstly, we visited Latin bridge – as well as the place which was the starting point of a World War I. On the same route we had the opportunity to witness the amazing neo-Moorish architecture of the City Hall, resembling the one of our Gimnazija building in Mostar.
Our next stop was Baščaršija which at that point was in the middle of renovation process, so it looked like a real archaeological excavation site. Going through those streets of Sarajevo, we saw the famous Gazi Husrevbeg’s Mosque, Sarajevo Cathedral, Museum of Sarajevo, Bezistan Bazaar as well as the Eternal flame monument. Despite the old town and Austro-Hungarian architecture we also witnessed the modern architecture Sarajevo has to offer. We managed to see the example of everything we heard about in the presentation from the previous day – Medieval art, Islamic art, different types of architecture etc.
We were kindly welcomed by museum’s curators for archaeology, ethnology and natural sciences departments. The most interesting part of the museum was archaeology section in which we saw many old monuments and things preserved over hundreds of years. It was remarkable experience to see all the valuable findings from Bosnia and Herzegovina, even some of the antique and medieval artifacts from Mostar and Mogorjelo near Čapljina.
To conclude, this trip was one extraordinary experience and something very useful for our knowledge in archaeology and our future explorations.

On our third day we traveled to the beautiful and historical city of Stolac, where we visited some of its archeological sites. First we arrived at Radimlja, a stecak necropolis located near Stolac where we were greeted by an NGO NeoNomads from Stolac. There we encountered tombstones that date from the 14th to 16th century with epitaphs written in Bosnian Cyrillic. The most interesting was a figural motif of a man carved in with a large right hand raised which presents both greeting of a friend and warning to an enemy. Next we visited the famous ruling chair of duke Stipan Miloradovic, from where he ruled a wide territory and from which he could judge anyone’s requests. Our guide Amir Ivanković and student Brandon Muhedini tried it for fit. Just a few meters away we stumbled upon and old church of Saint Peter and Paul, build by Duke Radosav of the Hrabren-Miloradovic family in 1505 where the body of the founder lies and another tomb with a figure of an archer. Afterwards, we drove into Stolac and up the hill to visit the great walls of Daorson, citadel of Hellenized Illyrian tribe. During 17/16 century BCE till the Bronze Age the entire area was surrounded by walls where the workers and traders lived on the outside and the tribesmen lived on the inside in very small huts. We ended our journey by visiting the Stolac castle where once Herzegovina was ruled from.

On Thursday 15th of October we had a Photogrammetry workshop in our IT classroom in UWC Mostar that was organied by arheon.net. At first, one has to take photos of the object from different angles and it is important to note that the ranges of two consecutive photos should be in a merging state. Second step is to transfer the pictures to the program (AgisoftPhotoScan) and clearing the unnecessary details. It has lots of applications including satellite tracking of the relative positioning alterations in all Earth environments, which means in the future we will be able to recreate a small scaled Earth which has 3D monuments and cultural heritages. Another important application of photogrammetry is the reconstruction of destroyed cultural findings. For example, nowadays the project called “Project Mosul” aims to resurrect the artifacts destroyed by ISIS. They are working to collect photographs of the destroyed statues that can be used to piece together 3D models of the destroyed artifacts. At this point, the usage of 3D printing also holds an important point, because it will be possible to reconstruct these artifacts via 3D printers.
In the end we made a 3D model of part of an amphora from Daorson, lend to us by Šejla Ivanković from NeoNomads. That is why we called it Šejla’s amphora.

Part of an amphora from Daorson by Drago on Sketchfab 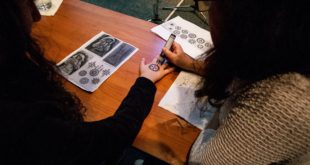