Examples of cut – stone tool specimens include flint blades, drills, scrapers and arrowheads. Blades found in Lisičići mostly have a trapezoidal section, though blades with triangular – shaped sections have also been found. Examples that Benac categorised, due to their length and mass, were placed in the category of neolithic blades. These massive specimens were partially and minutely retouched whilst all others were often highly retouched to produce tooth – edges. 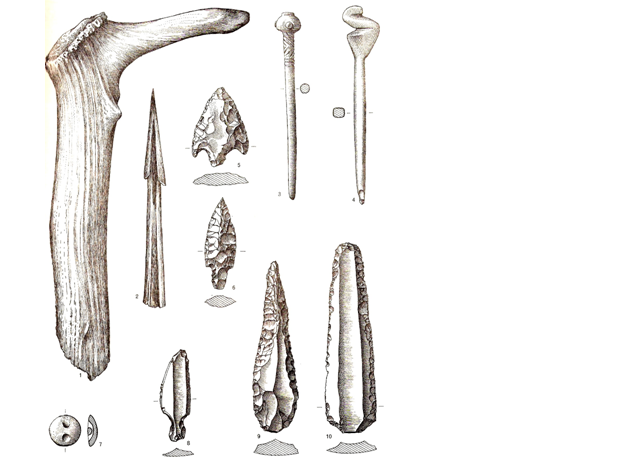 Cut – stone tools in Ravlić cave include examples similar in development from the previous phase and in greater number. In Phase II of Ravlić cave, a total of 38 stone artefacts were found, though flint blades were not.

Stone drills found at Lisičići are usually shaped with a high amount of retouching done on either side along their length, though examples have been found where only the top half has been retouched. Sections of stone drills are triangular or trapezoidal. These designs mostly served to shape bones, and most probably wood too.

The classic form of cut – stone scrapers are well – represented at the site of Lisičići. The classic form is best represented by specimens with a high retouch made on the one narrower side. The other variation being thin scrapers with retouching made on three sides. In Lisičići examples of rounded massive scrapers have also been found. Scrapers at the site of Ravlić cave are represent a small number of finds. Of all flint tools found at the site, the highest in number are axes, the only differences between them being their size and working of their blade.