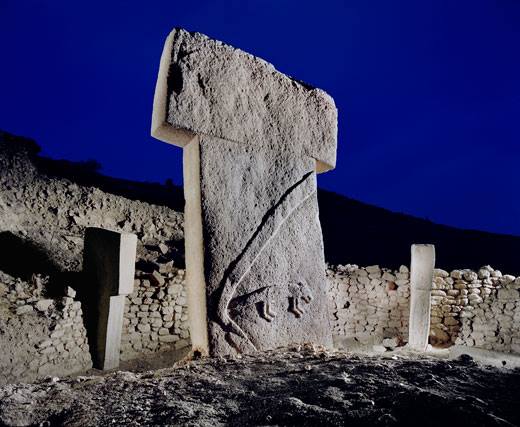 The site of Göbekli Tepe  is best known as the oldest example of monumental architecture. It is set around 9600-8200 BC. It was most likely raised by hunter-gatherers as the first permanent sanctuary in the world. A few stone rings have been discovered, and geomagnetic recording identified at least 20 or more of them.

All the circuits have the same shape and are made of limestone pillars in the form of giant wedges or capital letter T. The uppermost monolith was even 5.4 meters high and weighed 16 metric tons. The entire monolithic surface is decorated with animal bas-reliefs (scorpions, wild boars, lions, foxes, snakes and stylized people so that the whole column looks like a man wearing a belt). These blocks were linked by low stone walls, and in the middle of each ring are two high pillars.

The rings were, every few decades, buried and new ones were raised upon them. The site was built, covered up and re-built again for centuries, until 8200 BC, when it was abandoned completely.