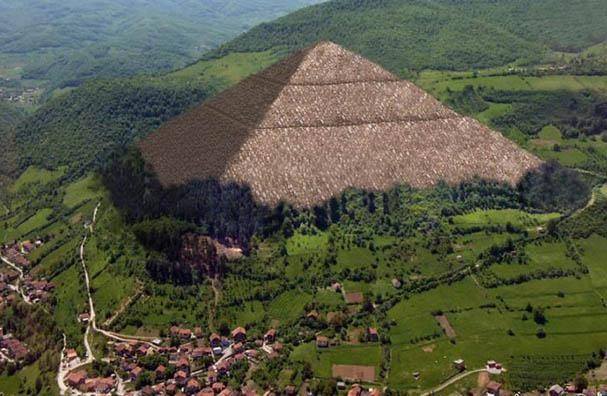 It’s been 9 years since Semir Osmanagić claimed to have discovered pyramids at the site of Visočice. Over the past several years public support to this self-proclaimed researcher went from great elation and media attention, including a documentary film about the pyramids, to disappointment and censorship. With media censorship it seemed to me that euphoria over this issue had finally ended and that Osmanagić and his pyramids will soon be forgotten, just like most other absurdities that occasionally emerge and are presented as brilliant ideas.

Since I am an Archaeology student, I’m always asked the same question when I talk to laymen: “What about Visoko pyramids?” Constant reminder of this question is an indicator that Osmanagić and his pyramids are not the thing of the past even though experts and media seem to ignore this issue.

The pyramids still exist in the minds of people who are not familiar enough with Archaeology and rich cultural past of Bosnia and Herzegovina. However, it shouldn’t be intellectually difficult to overthrow the thesis of pyramids in Visoko. All that is required in order to do so is basic knowledge of Archaeology and prehistory of the area. There are a lot of contradictions in the thesis Osmanagić presented and at the same time he didn’t even try to hide them.

In his book “Bosnian Pyramid of the Sun” Osmanagić from the start reveals his superficial knowledge on the subject of identity construction mechanisms and formation of social communities. He trivializes these issues through genetic research, i.e. in Osmanagić’s opinion identity construction and identification of an individual is influenced solely by ones genetic code.

It’s obvious that Osmanagić has literal understanding of terminology which replaces boring names of haplogroup with names of population and ethnic groups, where they are in fact mostly presented. Genes actually don’t play significant role in identity creation process. This process is the product of complex social (not biological!) relations.

There is a simple reason why, in his new book, Osmanagić spends the least amount of time writing about the actual pyramid. This is because there is no pyramid ! Geotechnical testing didn’t reveal anything except natural rock formations, which are desperately explained by Osmanagić as a product of human activity. He uses New Age stereotypes to convince us about the harmony between ancient men and nature. It surprises even more how Osmanagić (based on a couple of probe tests and superficial site analysis) solves the problem of pyramid construction, presenting his own assumptions as objective truth. According to lab analysis it’s unlikely that there was human influence on the formation of presented geological material. However, these results don’t affect Osmanagić’s ideas, which are delusional if we take into account further analysis of ancient sites in Herzegovina and the Adriatic region.

Over the last several years, Osmanagić’s delusional ideas are increasing and we are constantly hearing about the sale of mystical healing water from the pyramids, digging imaginary tunnels and revealing energy fields, glowing Orbs etc. This shows us that there is a connection between his ideas and History Channel’s SF series ”Ancient Aliens”, as well as science fiction author Erich Von Daniken. Unfortunately, History Channel and Daniken have the tendency to decieve their viewers and readers by presenting their SF stories as scientific facts.

Since it’s not so difficult to notice all the limitations of the thesis about pyramids, the question is why do people still believe in Osmanagić’s claims and why is it so difficult to explain that pyramids are nonexistent? The answer to this question, in my opinion, lies in difficult economic and political situation our society is in, as well as in lack of information about the true cultural treasures of our country.

This issue is also a part of a deeper problem, including bad educational system and lack of plan and coordination between archaeologists when it comes to popularization of Archaeology. However, it should be noted that particular cultural institutions, despite being in a difficult situation, are trying to change something in this domain, and are creating educational programs with no or minimal resources.

In said atmosphere Osmanagić’s imaginary pyramids have become a part of the Bosnian national identity and something that is believed in and not studied. This is at the same time the most dangerous feature of the theory about Bosnian pyramids, since it is quite difficult to break ones faith with science facts and logic. Also, every criticism of the pyramid theory seems to be offensive to Bosnians who consider pyramids as a part of their national identity.