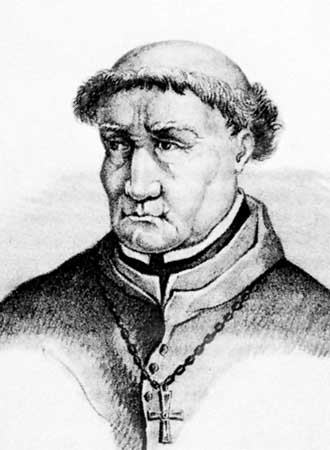 Born in Valladolidu in the year of 1420. In his early life he approached the Dominican religious order in Valladolidu. In 1483, the Pope declared him the Great inquisitor of Castille, and shortly after, nearly all of Spain.

Torquemada directed all of his efforts to destroying the Marranos, Jews that had converted to Christianity, in order to achieve a holy objective – acquiring the sangre limpia (or pure blood). During the trial of the inquisitions, the mildest form of punishment for Marranos was the confiscation of their property, whilst the hardest punishment was burning Marranos at the stake.

Torquemada succeeded in expelling all Jews from Spain, though it is an interesting fact that his grandmother was a Jew that had converted to Christianity. Usually, 3000 ducats were taken from every expelled Jew, which in turn strengthened the financial power of the Kingdom of Spain. Torquemada died of natural causes in 1498. One of his most famous quotes was:  “I am guilty of only one crime… that of being too merciful”.