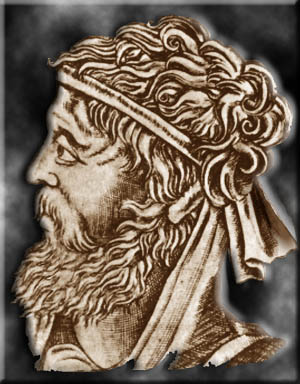 “To whom shall I give my new witty little book,
freshly polished with a dry stone?
Cornelius, to you: since you were accustomed
To think my trifles to be something
already when you dared, alone of Italians,
to explain all the ages in three books,
scholarly and painstaking ones, O Jupiter!
so take for yourself whatever from this book,
of whatever worth; may it, O virgin patroness,
survive more than one long age.”

This poem serves as the dedication of Catullus’ book of poems to Cornelius Nepos (c. 110 – 25 BC), who was a friend of Catullus’ and also a famous Roman historian . The “virgin patroness” referred to at the end of the poem is most likely the Muse.

Gaius Valerius Catullus (born c. 84 BC, Verona, Cisalpine Gaul — died c. 54 BC, Rome) was a Latin poet of the late Roman Republic who wrote in the neoteric style of poetry. His surviving works are still read widely, and continue to influence poetry and other forms of art.

Catullus’s poems have been preserved in an anthology of 116 carmina, which can be divided into three parts according to their form: 60short poems in varying metres, called polymetra, 8 longer poems, and 48 epigrams.

Simply by devoting himself entirely to poetry, Catullus was rebelling against what was expected of an upper-class Roman. He was one of the Poetae Novi or “Neoteric Poets,” who used colloquial language in their work, but also delighted in learned allusion. As a poet, Catullus was revolutionary in ignoring the public audience, and writing intensely about his personal experience for an audience of fellow-poets alone. A large number of his poems analyse his feelings about the two great loves of his life, Clodia and Juventius.

No ancient biography of Catullus survives. A few facts can be pieced together from external sources, in the works of his contemporaries or of later writers, supplemented by inferences drawn from his poems, some of which are certain, some only possible.

Catullus was alive 55–54 BC on the evidence of four of his poems and died young according to the poet Ovid—at the age of 30 as stated by St. Jerome (writing about the end of the 4th century), who nevertheless dated his life erroneously 87–57 BC.